For the first time in my adult life, overnight guests can sleep somewhere besides the couch.  As a fairly new homeowner, I have a spare room!  With an extra bed!  However, as a fairly new homeowner, the bed is a hand-me-down and the mattress has certainly seen better days.  Buying a new mattress has been on the to-do list for months, but various financial setbacks have pushed it on down the list.  But I’ve had overnight guests anyway. . . and then I end up feeling bad because I know their bed is not comfortable.

I have finally starting digging out of my financial hole, so I’m thinking there might be mattress shopping this weekend.  As I was plotting out where to go, budget, and what to do about bedding (my comforter from college currently resides on the bed–and it’s not terrible, but it’s no longer me), I had a kidlit flash: Anne being told that she could sleep in a spare room.

I’m sure you all remember the scene (and if you don’t, then you need to read Anne of Green Gables.  Go do it right now–I’ll still be here when you get back).  Anne is invited to attend a concert with Diana and spend the night.  As Anne is desperately trying to persuade Marilla she says: There’s just one more thing, Marilla. . . Mrs. Barry told Diana that we might sleep in the spare-room bed.  Think of the honour of your little Anne being put in the spare room bed.  This wa 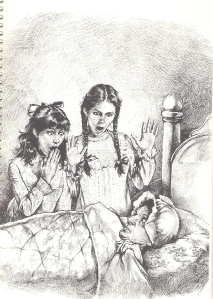 And then, a classic Anne scrape (where it’s not really her fault, but really, could it have happened to anyone else?):  The two white-clad figures flew down the long room, through the spare-room door, and bounded on the bed at the same moment.  And then–something–moved beneath them, there was a gasp and a cry–and somebody said in muffled accents:

Anne and Diana were never able to tell just how they got off that bed and out of the room.

It is Aunt Josephine, a rich aunt, who has quite a temper.  Later, Anne apologizes in a way only she can, concluding with: And then we couldn’t sleep in the spare room after being promised.  I suppose you are used to sleeping in spare rooms.  But just imagine what you would feel like if you were a little orphan girl who had never had such an honor.  Anne and Aunt Josephine discover they are kindred spirits, and Aunt Josephine promises Anne: when you come to town you’re to visit me and I’ll put you in my very sparest spare-room bed to sleep.

When I first read this as a kid, the magic of the spare room really made an impression on me.  I had grown up in a house with a spare room.  Usually, when we traveled somewhere as a family, my parents were in a spare room (as the kid, I rarely was!).  A spare room was not unusual at all in my life, but it certainly was to Anne–which I think is part of the reason the scene stuck in my mind (that and the image of them jumping into bed with Aunt Josephine!).

In thinking about the homes we have at the Village, we really only have one house that features a “spare room.”  In one of our log houses, I always talk to kids about the idea that everyone lived in one big room–there were no separate rooms for children.  But there weren’t any separate rooms for guests either!  Even when the family moved on up (we have both their first Texas home–a one room log house and their second–which is much, much larger!), there was no spare room for guests.  Oh, we have a trundle bed underneath one of the beds, but not a whole room.

Though I am by no means an expert on houses in the 19th century, it seems that spare rooms developed after two things happened.  1.  The frontier was settled, so supplies were more plentiful.  And the cost of construction went down.  2.  People had to be rich enough to be able to afford to have a spare room.  For decades, it was something only the rich could afford–and then, eventually, even the middle class could aspire to a spare room.  I wish I knew, when people were making choices about their houses, what the trends were.  A formal parlor or a spare room?  A dining room?  Some other special room?  What were the priorities?  Thinking of the two houses at the Village that are from around the turn of the century, both have dining rooms, a formal parlor, and a family parlor.  But only one has a spare room–and it’s not even the “richer” family.  But based on one little museum, I hate to make dramatic assumptions.

Anne was an orphan–she was poor and had been working in poor, crowded houses.  At the orphanage, her bed was one of many in a giant room.  So her thrill at being allowed in a spare room makes a lot more sense.  When she first arrives at Green Gables, the spare room is deemed to be too good for her.  Sleeping in a spare room was a sign that she had arrived–she was no longer thought of as an orphan first, but as a friend and honored guest.

And soon, my honored guests will be a bit more comfortable in my spare room.  Now, if I could just figure out what kind of bedding I want. . .

What have been your experiences with spare rooms?  And were they colored at all by Anne’s thrill?

2 thoughts on “The sparest of spare rooms”