I’ve long bemoaned the general lack of knowledge on the women’s suffrage movement.  A continual soapbox is how you cannot escape Black History Month in February, but it’s hard to even remember that it’s closely followed by Women’s History Month in March.  But that’s another post.

But things are getting better.  I think more and more people know about the grand dames of women’s history: Susan B. Anthony and Elizabeth Cady Stanton.  And if you’re lucky, sme folks will also have at least heard of Alice Paul (Iron Jawed Angels helped a lot with this).  But Carrie Chapman Catt?  Not so much. 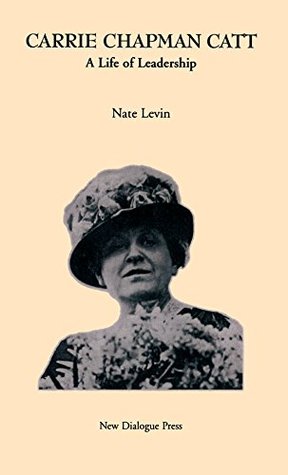 So kudos to Nate Levin for getting her story out there in his book Carrie Chapman Catt: A Life of Leadership.  Though I’d certainly heard of her, this was definitely the first biography I’ve read.  And in doing a bit of poking around, there really aren’t many other options.  His book is written for middle-grade students and is packed with information.  Catt was a master organizer–she traveled throughout the US and internationally, speaking on suffrage.  She established state organizations to work for suffrage.  She led the national organizations–twice!  But she wasn’t part of the “radical” group, like Alice Paul, which may be part of the reason she has been neglected.  Not quite so exciting.  After the suffrage battle was won, she began the League of Women Voters and then began to work for peace.  I don’t think she ever stopped working.

Levin is doing his best to make her story better known.  On his website, which can be found here, is the entire text of his book, along with tons of links for more information.  I wish he had included a few sources or at least the link to this site in his book.  The book itself is obviously a labor of love–it appears to be self-published and is definitely a print on demand book.  It would benefit a lot from slightly slicker packaging–better image quality and all that we’ve come to expect in books.  The text itself is great–he does a wonderful job of explaining some very complex issues.

It’s a well-written, succint, fascinating biography of a woman we should all know more about.  Hopefully, we won’t have to wait too much longer.

Note: I received a review copy of this book from the author.

One thought on “Shining the spotlight. . .”