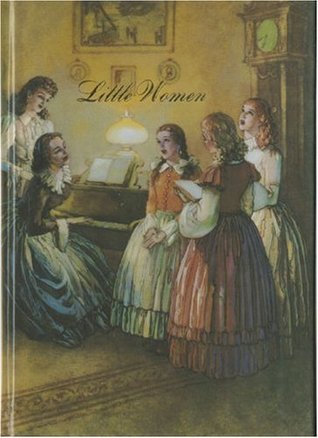 There are some books that I just assume everyone has read.  Often, these lines are somewhat generational.  For example, I just assume that everyone my age and younger has read Harry Potter.  And I had also always assumed that most older women have read Little Women.  (I definitely think it is less-read today, but I also think it’s more read than people assume.)  For the museum’s book club, we decided to focus this year on books written during our time period (1840-1910) that have been repeatedly mentioned in other things we’ve read.  Little Women was at the top of the list.  Going into our discussion, I assumed that this would be a reread for everyone–though it had probably been decades since they had last read it.  But almost half or our group had never read it!

This led to a really interesting conversation about why they had missed it and what it was like to read it for the first time as an adult.  Everyone liked it, though I’m not sure if our first-timers loved it.

Frankly, I was even more surprised because all of these women love history.  It seems like there are certain books that all of us history lovers (especially the women) have in common: Little Women, Little House on the Prairie and Anne of Green Gables seem to be the three most common. We also chatted a bit about what books they had read, and not a lot of historical fiction came up.  Though I still believe kidlit history is one of the best paths to history, it is good to be reminded that there are many ways to become a history fan.

As you know, I have often incorporated my own love of children’s literature into museum programming.  During our Little Women themed event about a year ago, one of my most devoted junior historians confessed that she hadn’t read any of the canon–or even those of the “secondary” canon–Frances Hodgson Burnett, Maud Hart Lovelace, etc.  We might have teased her. I might have threatened to kick her out of the program if she didn’t read at least one of my favorites.  I might have sent over her buddies (who had read all of the required books!) to give her a hard time.  Don’t know if she ever picked anything up, though I still allow her to be a junior historian.

So, what titles make you say “I can’t believe you haven’t read that!”?  What’s in your kidlit history canon?