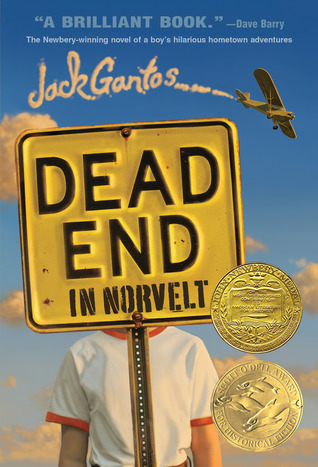 In anticipation of a solitary road trip, I headed to the library for an audio book.  Dead End in Norvelt by Jack Gantos caught my eye, in part due to these lines in the description: “melding the entirely true and the wildly fictional.”  Now, this was something that would make the miles pass faster.

As luck would have it, the road trip got cancelled, so instead I listened to it in fits and bursts during my regular commutes and while cooking.  This is definitely not the best way to enjoy an audio book, and sometimes days would pass before I was able to listen to the next chapter.  And there were times that I really wished I had been reading it, as there were some really, really good lines about history.

Modern fictionalized autobiographies, books that carry on the traditions started by Laura Ingalls Wilder, Ruth Sawyer, Carol Ryrie Brink and Maud Hart Lovelace, seem to be in short supply, but this book certainly fits the bill.  Jack Gantos grew up in a town with an unusual origin–Norvelt was a planned community, launched during the Depression as another relief organization.  Originally called Westmoreland Homesteads, town members later renamed it in honor of the woman who pushed this program through the legislature, Eleanor Roosevelt.  The book is just one important summer, a summer in which he’s grounded and becomes the official scribe for the obituary writer.  Miss Volker is a sheer delight–cranky and opinionated, but with a strong sense of history and her duty to pass that history on.  Her obituaries are truly a work of art.  As a historian, I loved watching the way she would weave past and present together.  At the same time, she was also a bit of a history preacher.  For example, there’s this great quote: “Be suspicious of history that is written by the conquerors.” Or this one: we have to save the history we have. You never know what small bit of it might change your life–or change the whole world.”

This book won the Newbery in 2012, and that award wasn’t well received by many critics.  I don’t pretend to be able to keep up with all the books in the running each year, so I won’t give an opinion on its worthiness.  Though this book wasn’t perfect, it does meet all my requirements for quality historical fiction.  It’s funny.  It has a good story.  It makes you want to find out more (I totally did some research on the history of Norvelt).  And it contains lots of details that you just might not include if your only knowledge of the time period was through research.  Do I think Jack will have the staying power of Laura and Betsy?  Probably not, but it was fun to get to know him.  And as a historian, it fills a great spot on the timeline of childhood during the 20th century.

With baby boomers’ strong tendency towards self reflection, I’m surprised that there aren’t more books like this being published.  Or perhaps I’m just missing them?  Who might be the next Laura or Betsy?  As technology marches on, childhood in the 1950s or 1960s is becoming more and more foreign, and it seems like this should be a booming sub-genre of children’s literature.  And honestly, after reading a lot of YA fantasy, it was a relief to be in a world for a while with no supernatural happenings.  Who else is writing fictionalized autobiographies for a young audience?  Is there a Laura for the mid-late 20th century waiting in the wings?