You would think after two+ years, the questions would have stopped.

“Why are you being so nice to Vogel Alcove?”

“Where’s the money in community involvement?”

“Why do you go to so many neighborhood meetings?’

There are a lot of very good answers to these questions, some of which I’ve addressed in previous blog posts.  I’ve gotten on my soap box more than once about the need for museums to be more involved in their communities–and to start thinking differently about what community involvement means.  It’s not just about getting people to walk through your doors.

But here’s a new answer: I don’t think I would have survived this past week without the past two years of increasing community involvement. And my museum would be in a very different place.

On Monday, we needed to make a call about whether or not to pursue a rain plan for our largest fundraiser, History with a Twist. During a two hour meeting, the forecast for rain on Saturday went from 40% to 80%. We decided to wait until Tuesday morning to make the call.

Usually, DHV can’t do much about rain.  We can cram about 200 people into the Pavilion, but with 300+ expected guests, food, silent auction, and drinks, there weren’t any good options to keep it at DHV.  However, when the 10 day forecast came out, with an 80% chance of rain, I emailed Karen, the ED at Vogel Alcove. I asked: “Is there any way we can move Twist to your building? I know you may have a lot of issues to consider regarding this request, but please think about.” I was expecting a long conversation because this was a very, very big favor. Within a few hours, Karen wrote back “Of course. Whatever you need.” I shouted Hallelujah at my desk. More than once.

First thing Tuesday, I had a long chat with my event chair, Don. Forecast varied depended on where you looked, but all said we would have severe weather on Friday night. This meant set up, particularly for sound and lighting, became more complicated.  We knew Vogel would be a very tight fit, but I thought it would be better to spend the week stressing about things we could control, rather than things we can’t.  I decided to ask Helen, my director of sales, how she would advise a bride and get back to Don. While I was on the phone with Helen, my phone rang. The last time I ignored a call from the Ticket Office, a reporter had shown up. So I picked up–another reporter had arrived.  I texted Don as I walked over, letting him know it would be a little while before I got back to him.

As I was chatting with the reporter, he thought he had a scoop on the growth of the encampment behind DHV (nicknamed Tent Village) as Tent City was closed. I told him that he was the 3rd reporter this month. (Story 1, Story 2, and Story 3)

When I got back to the office, I called Don and we made the decision to proceed with moving Twist to Vogel. Helen and I had a quick meeting, and we got to work on contacting vendors and figuring out the setup.

In the midst of all this, I had a long conversation with Michael, one of my favorite neighborhood advocates–and a member of our board. The day before, there had been a rather contentious Public Safety Committee meeting at City Hall. CM Greyson asked a lot of questions regarding police plans regarding Tent Village, and they continued to state that it wasn’t a priority. But this was the first time someone besides our council member, Adam Medrano, had asked any questions.  This seemed like a small glimmer of light in what has been a very long, dark tunnel.

Earlier that morning, I had received an email from Stephanie, who is our primary contact for schools. As a result of Friday’s Channel 8 story, schools were calling, concerned about their students’ safety if they came to DHV. Two schools requested to talk to me directly. A few schools cancelled. Late Tuesday afternoon, I sent an email to Mayor Rawlings and Adam letting them know that I had just reassured two schools that their students would be safe on their field trips.

That evening was the monthly CBD (Central Business District) crime watch meeting. I hadn’t planned on attending–I have been to a lot of crime watch meetings over the past year, and I can only tolerate them so often.  Also, it was FYA book club night. But after hearing more about the Public Safety meeting and seeing a note that one of the agenda items was Tent Village, I figured I should probably go.

As I walked up, I happened to run into Adam. He told me that the letter writing campaign we launched on April 15 was working–and we needed to keep it up. He also mentioned the letter I had just written to the Mayor–and that he had already gotten a call from the Mayor’s office. Another glimmer of light in the tunnel.

The Dallas Police Chief was there, which I hadn’t realized when I made my decision to go.  When the floor was opened for general questions, the very first question, not asked by me, was about their plans regarding Tent Village.

I want to pause for a moment to say this: at every single meeting I’ve attended regarding the current Dallas homeless crisis, I have never been the one to bring up Tent Village. Someone else always does it first.  This isn’t by design–there’s no planning or coordination. It just happens. Do you know how gratifying that is? How good it feels to see all your advocacy work out in the community like that? I don’t think there’s a better expression of how the Cedars neighborhood feels about Dallas Heritage Village than what is said in these meetings.

Chief Brown said “I’d like to hear more about what’s going on down there.” The entire room tilted towards me.  I introduced myself. I mentioned Friday’s story on Channel 8 and that schools no longer felt it was safe to visit DHV. He asked if the story was accurate. I said yes. And then I said: “My one question for you, Chief Brown, is why it’s not a priority for the City of Dallas to protect a city-owned cultural institution?”

At that, he and Chief Lawton (over our area) sat straight up and started to sputter. Chief Brown “I never said it wasn’t a priority.” And then the strangest thing happened: at least four voices, including my own, responded: “But your actions do.”

That may be the moment when all the momentum we’ve been building as a community–the letter writing, the tweets, the meetings, the news stories–finally began to turn the tide. Chief Brown promised to make closing Tent Village a priority. He asked us to help with creating barriers to make it a less enticing spot. I responded that we had neighbors that have been talking about a cactus/rock garden for months. Enthusiastic nods around the room. At 7:15, I left to head to book club. I really needed a beer.

Early Wednesday evening, I was chatting with my board chair, Trey, after a meeting. My phone buzzed, and I glanced at it. It was a direct Twitter message: a photo of a cleared area behind the Farmstead and the message “Thanks to all involved.” I stared at my phone, not quite believing what I was seeing.  “Umm, Trey. . .” And then Michael posted something in one of the neighborhood groups on Faceboook. I clicked on that and saw this picture: 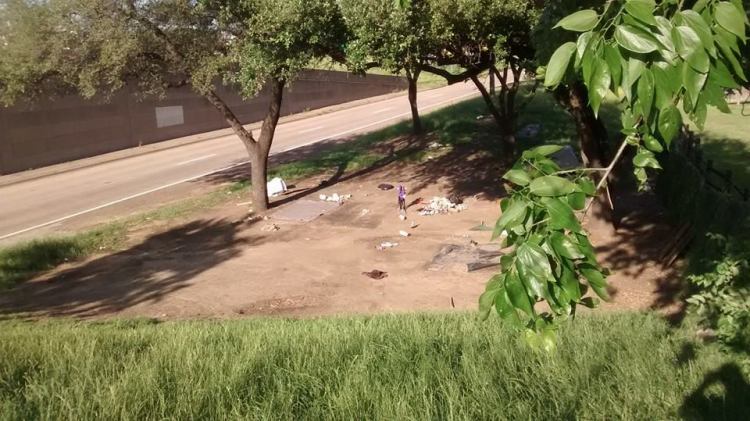 After a long trying process, most of tent Village is gone. This is been the culmination of the efforts of many many people. We hope we can remain that way. Some cleanup still has to get done Landscaping xcetera to prevent them from coming back. Many thanks to Chief David Brown Adam Medrano and all the people in The Cedars, DHV, and Farmers Market who made this happen over the past few months.thanks to all DPD and support from friends downtown.

Trey headed out as I called Michael. Several neighbors were in our small parking lot off Ervay, so I ran over there. We all kinda looked at each other in amazement, stunned that the city had finally taken action. We all know it was just a first step, that there is still much work to do–both to help the homeless and discourage the camp from forming again.  However, we still decided that we needed a beer.

On Thursday, the forecast changed again. Late that afternoon a committee member asked the question I had been avoiding: can Twist be moved back to DHV? We started reaching out to key vendors to find out if they could change their set up schedule. They could.  On Friday morning, I made the call–back to DHV! And I thanked Karen again, who responded “You know if you hadn’t made all those plans, the forecast wouldn’t have changed.” Nothing about the time her staff spent answering our questions, planning the setup, all the week before their own big fundraiser. As I said in my remarks on Saturday, they are the definition of neighborly.

That evening, I went to the monthly Cedars Neighborhood Association meeting. We are the default hosts, but on Monday, with my cloudy crystal ball, I asked them to find a different location as I didn’t want to ask anyone to stay late to host–and I knew I didn’t want to. But with all that had happened, I knew I had to go. While I was eating dinner, the official word was spread that Tent Village would be closed in conjunction with Tent City on May 4. I spoke briefly about the landscape/barrier plans, and then I said “There are certainly challenges in running a museum in our neighborhood, but there’s not another neighborhood in Dallas I would rather be in.” And then I totally started crying and quickly sat down.

My Saturday started pretty early by my standards–breakfast at 8 with the Mayor Mike Rawlings and selected neighbors. it was on the calendar before the events of the past week, but the timing certainly felt fortuitous. We talked more about Tent Village, the challenges of being in the Cedars and feeling neglected by the Powers That Be. It was a very good conversation, though I remain somewhat pessimistic about any radical changes. And then, I headed to DHV to start setting up for Twist.

Saturday ended up being just about a perfect day, weather-wise. Not too humid, not too hot. It was a beautiful night at DHV.  Many, many neighbors were there too–along with Adam Medrano, board members that have definitely had my back through all of this, my parents, family friends, and museum friends.  It was a good night–we raised some money, had some fun, and I didn’t tear up once.

So, why write this very long blog post on some issues that are perhaps unique to DHV? Well, first, I write to process–and there is a lot to process. But for my museum friends that are reading this, I ask you:

Lots of work still to do, and the Dallas homeless crisis continues. Tent City and Tent Village will be closed on Wednesday. It will likely be another crazy week, but perhaps a bit calmer since Twist is now behind us. And no matter how crazy it gets, I know I have some neighbors and friends that are willing to have a drink with me as we attempt to build a better community.