In this age of #metoo and constant headlines regarding sexual harassment, feminism isn’t quite the dirty word it used to be. Lately, several books I’ve read have approached feminism in some very different ways–usually successfully, but one not so much. Of course, it isn’t like my reading interests have taken a turn to feminism over the last several months. Since I could read, I’ve been reading books about strong girls and women. Women’s history has always been a passion of mine. But I have to admit that it’s kinda nice to see our ranks growing.

My feminist winter started with The Hired Girl by Laura Amy Schlitz. It came out a few years ago, and many trusted friends adored it. Several friends mentioned that it reminded them of Anne of Green Gables, which if you know anything about me, you know that’s one of my all time favorite books. So, my expectations were high. 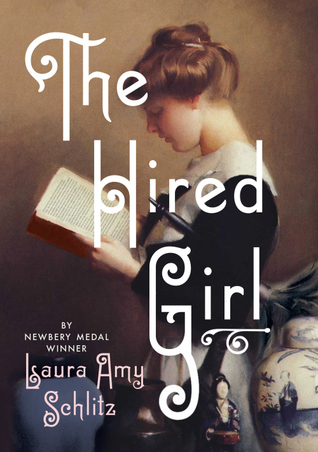 Alas, I spent most of the book annoyed. Yes, Joan gets into scrapes. She craves books and opportunities for education. But I just didn’t like Joan. She serves in a Jewish household, and she almost immediately starts trying to convert them to Catholicism. She flirts with the sons of the house. And through all this, her employers make all kinds of accommodations for her, including ultimately sending her to a private school. It was all just too hard to believe.

The timeline of the book is only a few months, so I guess I shouldn’t expect too much character growth. But there seemed to be none. In all honesty, I think Joan felt very entitled to all of it–every adjustment made on her behalf, every acceptance of her truly bad behavior. And perhaps that’s why the comparison to Anne Shirley rankled so much. Anne never felt like she deserved any of the love given her by Diana and Marilla and Matthew. Though she earned her top of the class rankings and her entrance to Queens, I think she always held a bit of disbelief at her good fortune. Which is a big part of what makes  Anne so relateable still, 110 years after her debut.

I also felt that Schlitz missed some important historical opportunities. The movement of women into paid work outside of the home is such an important thread in women’s history. It started in the 1820s with the Lowell Mill Girls. It was hard, difficult work, but it was an opportunity to continue their education, earn their own money, and get off the farm. In the process, they were exposed to many different cultures and environments. One of the most moving experiences I’ve ever had at a historical site was at the Lowell Mills–I got to the museum when it opened (time was short!), and they asked if I’d like them to turn the machines on. There was a huge space and maybe a third of the machines (looms and more that I can’t remember) came on. The speed and the sound just took my breath away. And I started thinking about these young, young women who worked at those machines–and had probably never seen anything quite like it before.

Though this book takes place in 1910, I wish Schlitz had spent more time with Joan’s adjustment to a bustling city. It’s clear that Joan comes from a pretty small town. Where is the sense of wonder and amazement at the department store? The large buildings in Baltimore? When teaching people about the past, I think it’s important to get them to imagine the amazement at the many changes we take for granted today. At the museum where I work, we’re lucky enough to have both the log cabin the Miller family first lived in when they moved to Texas–as well as the giant mansion they built several years later. When working with kids, I always say “Imagine if that cabin was all you had ever known–and then you got to move into this house. What would it feel like?” Gets them every time. But I never felt that emotional pull of the wonder that real life Joans probably felt when they first arrived in the big city. Perhaps this is another effect of the sense of entitlement that Joan had.

One thing that Schlitz does very well is the portrayal of Joan’s mother. She married late in life, not for love but as the last remaining option. She encouraged her daughter to go to school. And most movingly, she tucked money into a doll’s skirt so that Joan would have a way to escape. The hard work of the farm ultimately killed her–a not uncommon story.

Though I understand why people liked this book so much, it wasn’t a book for me. I do applaud Schlitz for shining a light on this moment in history. And I loved that it was set in a Jewish household. Plenty of things to like, but not quite enough to love.

As I typed this, I realized I had a lot more to say than planned. So, call this the first of a three part series. Not bad, since I haven’t posted here in over a year. That darn job of mine keeps getting in the way of my hobbies! Look for part 2 soon.

4 thoughts on “My Feminist Winter, Part 1”