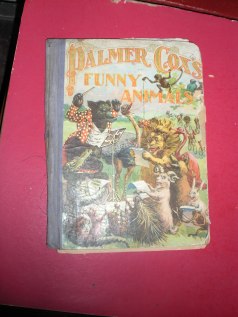 ings lead to very interesting discoveries.  During the course of a work project, I ran across this book.

Do you recognize the name?  Me neither.  So, since our curator is out of town, I went to google and was fascinated by what I found.

First, this book was an advertising premium.  If you bought Union Club Coffee or Russian Oolong Tea, you got a coupon for a Palmer Cox book.  This sounds like an infinitely better prize than the tattoo that come in Cracker Jack boxes.

But my history geek heart really began to soar when I discovered that Palmer Cox did a lot more than write books about funny animals.  He created the Brownies, a series of illustrated books and comics.  In the 1880s, these characters were all the rage.  The Brownies were so popular that when Kodak created its first handheld camera in 1900, they called it the Brownie.  Doing just a quick search on the web, I discovered Brownie pins, books, dolls, dishes, and of course, coffee.

Fictional characters have been selling stuff to kids (and their parents!) for a very long time.  Sometimes we assume this is a fairly recent innovation–another example of commercialism taking the world over.  Did you know that Beatrix Potter licensed a Peter Rabbit doll in 1903, less than 2 years after her books was self-published?  After Frances Hodgson Burnett published Little Lord Fauntleroy in 1885, the Fauntleroy suit became all the rage until World War I. Parker Brother issued a board game in 1915, called The Glad Game, based on Pollyanna (published in 1913).  Years ago, I ran across a game board in an antique shop.  It wasn’t terribly expensive, but out of my budget at the time.  One of my great antique shopping regrets.

Children’s literature has been big business for a long time.  Some of these books are still classics, but others have been lost.  I feel like I should have known about Palmer Cox before now.  But now that I do, I’m going to be keeping an eye out for his Brownies.  Now, if only they would be like the Brownies in the Girl Scout story and magically clean my house!

Any other examples of children’s literature intersecting with commerce before World War II?

One thought on “Shopping with your favorite characters”