I have never been a fan of Native American history.  It’s not the guilt over how we stole their land and slaughtered them, whether by disease or guns.  No, it’s really just that I am not an outdoorsy person.  And living off the land has never been something that interested me.  I admire that some tribes use every bit of an animal, know the medicinal qualities of plants, and can track animals, but I’m not really interested. 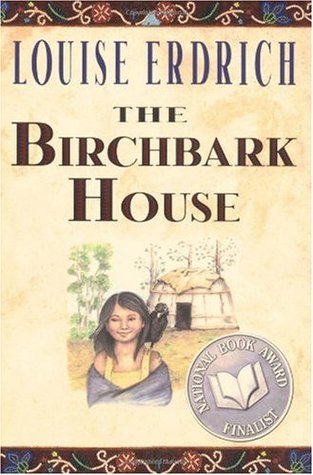 For years, Louise Erdrich’s 1999 novel, The Birchbark House has been held up as a counterpoint to the more frequently assigned Little House on the Prairie as a way to get the other side of the frontier story in kids’ minds.  In fact, in an interview Erdrich said “I loved the Little House books and the specificity of daly detail, the earthy substance of the food, work, the repetitions and the growth that make family.  I get crazy when I read about pioneers moving forward into ’empty’ territory.  They were moving into somebody else’s house, home, hearth, and beloved yard.”  So though Erdrich’s books may have been a partial response to Wilder, I think it does a great disservice to only think about Omakayas v. Laura.

The Birchbark House is the story of one year, 1847, and the life of one family, members of the Ojibwa tribe.  They live near Lake Superior.  I will admit that it took me several days to get into this book, and I kept getting distracted by other things.  But Omakayas really started to grow on me–she’s in the process of discovering her place in the world, a truly universal story.  And the chapter about smallpox took my breath away.  We modern folks forget how truly terrifying disease was, and Erdrich, though also a modern person, does an amazing job of capturing the fear.  Check out this passage, early in the chapter:

It was hearing of his death in hushed tones, though, the next day, that we would always recall.  The report of it.  For the horror flooded swiftly from house to house, lodge to lodge.

He died of smallpox.

Although the visitor’s body was taken to the farthest end of the island, although everything he’d touched was burned, including the lodge he’d stayed in and the blankets he wore, although the generous family who let him in purified themselves in the sweat lodge, burned all of their belongings, and threw themselves upon the mercy of the missions, fear abounded in the settlement.  Had the visitor left another, more horrible visitor behind?  Sickness?  Death? (p. 142-143)

When I finished this book this afternoon, I realized to my surprise that I really liked it.  The characters felt natural, not forced as so often happens in historical fiction.  Erdrich did base this novel on her ancestors, and the connection shows.   The illustrations, done by the author, are charming and add so much to the book.  Lots of good detail, and there’s a natural, wonderful flow to the story.

Am I now a fan of Native American history?  Not really, but I am a fan of Omakayas and her story.  But I suppose that’s a start.