Six weeks ago, one of my favorite historical fiction authors for kids and teens passed away at 84. He died in the middle of a pack of famous writer deaths, but his death made me far sadder than those “Great American Authors.” I haven’t read all of Richard Peck’s novels, but the ones I have read have been funny and spot-on historically and full of characters that seem real. He never fell into the trap of so many people writing history for children, trying to cram too many big ideas or big events into one story. The story always came first. (Previous rants here and here.)

People posted some lovely remembrances of him including this obituary in the New York Times which reminded us all that he believed in “the need for children to learn history through vivid storytelling.” There’s also this lovely piece, written by Betsy Bird, at the School Library Journal.

When he died, I looked back through this blog and realized that though I’ve mentioned Peck as a favorite, I hadn’t ever written anything about his work. It took some time due to other deadlines, but last week, I picked up the one book of his that sits on my shelf and settled in for a reread of Fair Weather. Tucked inside was a ticket and program from a lecture he gave at the Dallas Museum of Art back in 2006. I don’t remember many details of what he said, just that it was delightful. However, I do remember what I said to him in the signing line. 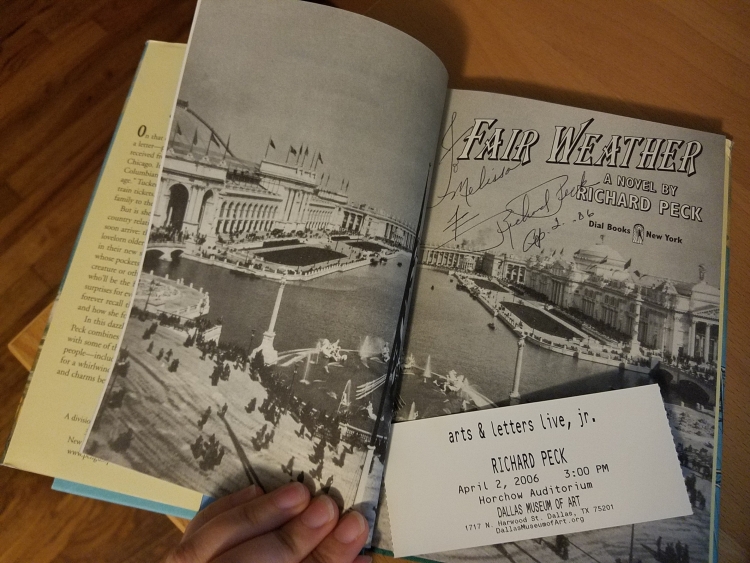 I don’t know if you have this problem too, but I never, ever know what to say when I meet an author who’s written books I love. Especially in a signing line, and especially when there are kids in line behind me that are Really Excited. They’ve heard it all before, right? Usually, I go with a quick “thank you” and move on. But with Peck, I told him “I’m a history museum educator, and thank you so much for making my job easier.” And he smiled, and we had a quick conversation about kids and history. Two of my favorite things.

Fair Weather isn’t my favorite of his novels, but it is about one of my favorite 19th century events–the great Chicago World’s Fair of 1893. And it may drift into that dreaded territory of too many delightful historical coincidences. But the characters are delightful. The amazement at traveling to a big city for the first time is there. It’s funny. And there’s that deeper story of “society” and the lines we draw between ourselves and others. Plus, there’s just enough history to encourage readers to dig a little deeper if they want to know.

Richard Peck was a charming, gifted writer who clearly loved history. But it’s perhaps his sense of humor that really makes his books stand out. We need more like him.